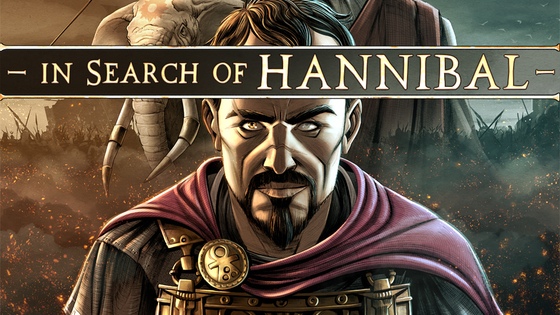 In Search of Hannibal - A Graphic Novel

Latest Updates from Our Project:


Here is a long awaited update with Lloyd putting Lloyd in the hot seat grilling Lloyd on some of the most common questions and concerns:

Personally, my own update (the artist writing here) is quite short. You can't film a movie without having a script, and you also can't illustrate a comic without knowing what's happening on the page, who's saying what, and whether or not that character is taking a pilum to the neck in the next panel.


Regarding the funds, they are 100% untouched and locked in place for the production costs of printing and shipping (which is good as both of these have increased dramatically in the past few years). We will not be one of those campaigns that comes crawling back looking for money to cover the overhead costs of printing or shipping. Your order will be fulfilled.


Now here's the part where I write something that may rub some the wrong way, but please bear with me. For as much as this delay has driven me over the edge... there is some good. There's been time to evaluate aspects of the campaign and certain doors have opened that were once closed. This means the final result will be far, far better than it would have been originally. So I'm thankful for finding some incredible positives in this. I'll share more of this once we round some milestones and I can project a timeline more accurately.


Some who may follow me on various corners of the internet may wonder why I'm working on projects other than Hannibal. The answer is simple: like everyone I still need to work and I make my living as an artist. And back to the funds: they're locked. It's been very difficult navigating this, yet in no way has any other project of mine ever interfered with production on Hannibal.


The Story of the Story continues. An epic indeed.

Thank you all so much for hanging in there.

Another New Year, and so another hope of finishing the book in time
for Christmas dashed.  Though the light at the end of the tunnel seems
ever brighter, it remains difficult to judge the distance to it.  With
projects like this, the final finishing touches can end up taking
longer than a lot of the meat of the thing.  A short while ago, I sent
Chris another twenty-something scenes to draw, and he seemed pleased
enough with them in themselves, though of course they would have been
even better had they been accompanied by every last and final word of
the thing.

Trying to get big creative works out of people can sometimes feel like
trying to get blood from a stone.  I feel like that, and the trouble
is that in this instance, I am the stone!  All going well, though, we
should have the whole thing fully mapped out to the end in the next
month or so, which then leaves an awful lot of drawing, reviewing,
making little alterations, and then when those diligent tasks are
done, we can get on with printing the physical things and then start
worrying about distribution.

Thank you so much for bearing with us.  This has been a major learning
experience for me, but despite all the setbacks, I have never feared
that Chris would not be able to draw you a damn fine comic book.
Hannibal's story is an amazing one, and even though we have to fit
such mighty men and epic events within the confines of one slim volume
of pages, I still dare to hope that we will convey enough of the sweep
of history such that Hannibal, like himself, might for one glimmer of
a moment assume the port of Mars, and that it may seem that at his
heels, leashed in like hounds, shall Famine, Sword, and Fire crouch
for employment.

Hello to our admirably patient backers,

As is only reasonable, many of you have been asking about the delivery time of the In Search of Hannibal graphic novel.  It is difficult to imagine that anyone could be more aware of the fact that we are hideously late with this than we are.  For the customer, it is an annoyance that he is being kept waiting.  For the creators, it is a heavy cloud hanging over us every day.  If we knew the day of delivery, we would be gladly announcing it with fanfares, and with joyous relief.  We still don't, though.  But we do have most of the novel done, and we have not come this far just to give up now.  We are made of sterner stuff than that.  The clear outline of the end of the tunnel, with an accurate measurement of range, is still elusive, but we do see the rosy rays of dawn ahead, making the night behind us seem worth the distance come.  I must shoulder the blame for taking so flipping long to come up with a finished version of the script.  Working in isolation on such things is perhaps not the best for me.  I'm a perfectionist with a complicated relationship with deadlines, surrounded by distractions, and wrestling with the powerful Procrastination Monkey and often coming off worse.  I am tremendously lucky to have the faith of the illustrator Chris, who has rebuffed offers from others to write his script.  His faith, though, seems to be based far more on my ability to write good stuff than on my record of writing stuff *quickly*.  That we have got this far shows that we both think that the project is worthwhile, and what makes it seem so is that it is turning out to be good.  We both really want to see this thing finished for a host of reasons.  It will be such a relief to post everything off and know that it is finally *done*.  The dark pendant clouds over us may then go to menace someone else for a change.  Also, though, we want to be proud of having created something good, and the scenes we have finished suggest that we can do this.  We look forward to entertaining you with In Search of Hannibal.  We think you will like it.  Whether it was worth the wait will be for you to decide.

If we're doing a story around the 2nd Punic War we'll be dealing with the Battle of Cannae in a major way as this was one of the most defining moments in the war.  Lloyd has put together a really great video for those who want to learn more about it and its significance:

Also, be sure and check out the link below to see some new pages:

We've crossed the 100 page mark (of completed pages) and have some really nice momentum. We've also brought on a project manager to help speed the writing process so we can wrap up that stage. Very soon I'll have a finished script, which means I can give you all a proper ballpark date for when the art will be finished and when the book will be off to print and shipping out.

I can't wait to show you all the insanity of Cannae. I insisted I wanted 3 back-to-back double page spreads of carnage an mayhem. On top of it, I have incredible reference as I've been to the site myself. The project is monumental in it's scope. And as always - THANK YOU for helping us make it.